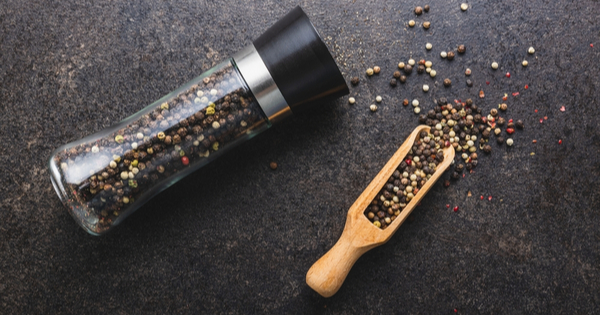 Warning, this post contains impolite language, do not read out loud if children are present.

“Who is more to be pitied, a writer bound and gagged by policemen or one living in perfect freedom who has nothing more to say?” Kurt Vonnegut [obviously the policemen]

I know things are bad when it takes me three weeks to drum up the energy to refill the pepper grinder. I think I like the idea that it remains as empty as I feel.

I read somewhere that depression and winter are an even worse combination than orange juice and toothpaste, it seems oddly applicable to my current conundrum.

When the juices of inspiration dry up and there’s nothing to say I usually hunker down and listen to my muse but today she remains stubbornly silent.

Yes, I’m in that kind of mood. It could be worse.

This might have something to do with seasonal depression, which seems more prevalent than Omicron, and they’ve yet to develop a vaccine. Or it could be my peppery roommate? It’s a toss-up but I’m betting the familiar face takes the win.

In my mind, there is nothing in my life worth noodling about, in fact, not one potential topic has courted me in days, it’s as if I need a dating coach because believe me, nothing is swiping up.

Have you ever felt that way?

I realize I’m in a funk. One way to get past the blockage is to walk. I put down 20,000 steps the other day. Nothing. The mood prevails and I’m left with sore calves and a hangover.

Is writing about writer’s block the best I can do?

I feel rather small, the keyboard appears as big as a piano, and I shrink away from the enormity of an instrument I have no idea how to play.

Here’s the other thing, I have promised twenty thousand words to my editor by February first, and I have only written one sentence. Specifically: Well past her expiration date, she was left unrefrigerated, fermenting on the counter, her essence now sour, spoiled, and yet some would say cultured.

My editor will surely love that line.

A few days later I’m having coffee with my sister Nancy, as I’m grousing about my woes, I throw in some talk about the essays I’m considering for the collection.

She listens, nods her approval every few minutes as if a Priest, but when she stifles a yawn, I realize I’m not in a confessional, and I’m putting her to sleep. Really? So I say, “okay, let’s do something productive, I need a cool title.”

She says, “I thought it was called Living in the Gap.”

“I did too but then Tony (my older son) suggested I come up with something a little more provocative, memorable, less boring.

“I know, but he’s right, remember the book that came out for new parents a few years back, I think it was called, Go the Fuck to Sleep? The title alone put the book on the bestseller list but it was also funny as hell.”

“It jumped off the shelves, but I don’t think my readers would buy a book entitled The Fucking Gap or better yet A Pussy Past Her Prime.”

Nancy gasps and says, “Mom and Dad are probably hovering over us right now, and believe me they’re having a hissy fit.”

“No way. They’re lounging on some puffy cloud laughing so hard they’ll have to change their depends.”

“Cheryl Lynn, that’s horrible, no one pees in heaven.”

After using the total sum of our mutual intelligence, we came up with a list of sup par titles, but it’s a start:

Well, we had a good crow about our intriguing and controversial titles before Nancy pulls out her phone and orders us some lattes.

Nancy says, “it’s time to change things up, shake you out of this sully mood, let’s go antiquing.”

Mackenzie, Nancy, and I pile in my car, pick up our coffees, and as if it were inbred, we head to the coast.

Jumping on Highway 17, we snake our way to Soquel, Nancy has a place in mind she wants to check out. As we edge closer to the ocean, it’s as if the fog lifts, and I can feel my entire body relax. This is why it’s imperative I live in a coastal state. It’s where I go when I’m in need of healing.

It’s as if the salvific waters have palliative powers, washing away my doubts, bringing resuscitating waves of oxygen to this breathless soul. In my case, it acts as a defibrillator, an electric current straight to the heart.

The antique store was divine, full of cluttered, dusty, pieces from the past just waiting to be repurposed. I’m not sure where this love of antiques came from, I’m inclined to blame my parents, but Nancy and I absolutely adore rummaging through dented and disposed of trinkets, hoping to find that missing piece.

Okay, the truth is, I found several missing pieces that are essential to my sense of completion, Nancy’s puzzle seems more finalized, she prefers looking over buying. Clearly, Larry married the wrong sister.

I found this darling little sign, you can never have too many of those, it says Keep the Water in the Tub. You’ll understand if you’ve met my grandchildren. I also purchased a charming towel holder for the refurbished bathroom and a nightlight for the lakehouse in the shape of a sailboat.

I know, I know, it makes me want to pirouette too.

We must risk delight. We can do without pleasure, but not delight. Not enjoyment. We must have the stubbornness to accept our gladness in the ruthless furnace of the world says Jack Gilbert. Now that’s what I’m talking about!

Mackenzie was quite taken by a ceramic blue cross which she delighted in bringing home to decorate her already cluttered room. The concept of simplicity of lost on some people, and yes, I’m projecting.

Stashing our finds in the back of the car we head to another establishment in Scott’s Valley that has even more delectable, dusty outcasts for our perusal. I’ve been looking for a set of eight Dorthy Thorpe wine glasses ever since I saw some in Palm Dessert while shopping with Claudie and Jan. I was immediately enamored with the vintage style and thought they would be charming with my Mom’s china.

Come to find out they’re as rare as a good muse.

Obviously, my luck is about to change, I call it a sign, but Nancy says it’s her astonishing ability to locate the best antique stores in town.

Regardless, I almost missed them, they were stacked in the back of a deep shelf, behind a striking set of whiskey tumblers embossed with ducks. I had to kneel down, as if in prayer, when I found myself staring at a set of seven Dorthy Thorpe wine glasses, in perfect condition, monogrammed with the letter S. And the best part, there was a plant light right next to them, shining its light on this particular collection of vintage glass. Mom and Dad much?

Can you believe it?

I almost bought them (the glasses not the plant light) because my mother’s maiden name was Severance, but with monumental willpower, I pass them up. I need eight and the S is clearly not an O, but still, it’s a sign. (Gail, let me know if you’re interested)

See, I can be as resolute as Nancy, sometimes I even say no to those Amazon daily deals, and second helpings at the dinner table. Hey, I can always go back if I change my mind.

On the way home, as we’re shooting the shit, my mother-in-law calls, she says, “didn’t know if your husband gave you a heads up, but we’re coming over to watch the game, I’m bringing wine and snacks.”

“That sounds like fun Nana, and no Larry didn’t mention it to me, thanks for letting me know. I’m coming over the hill from the coast, I’ll be home soon.”

After dropping Nancy and Mackenzie at their house, I drive the seven miles to my own home, hoping to clean up the kitchen before our guests arrive. As I’m loading the pepper grinder I think about the trinkets now stashed in my closet.

I can’t help but smile, life is like that, the things you love, cherish, fuss over for forty years, somehow end up in an antique shop, only to be purchased by the lady who was searching for answers, who feels small, who needs not the thing, but the love left like dust on its surface. I suppose that’s true for relationships too, they’re precious when imbued with love, our last dance with immortality if you will, the memory of which is all that remains.